Litter: Who Is Responsible?

This spring I joined a group of community volunteers cleaning up litter along the Plymouth Greenways Trail. We found the usual collection of soda cans and bottles, disposable masks, Starbucks cups, diapers (eek!), fast food containers, plastic bags, and other garbage.

I enjoy a few hours spent cleaning up with other like-minded individuals. I like leaving a place tidier than it was when I got there. And since I love analyzing waste habits, it generates plenty of food for thought. Why do people throw this stuff in this spot all the time? Why does one area become a dumping ground? I have often speculated that tires grow like mushrooms: once a tire gets dumped in a certain location, others seem to show up, too.

I still get disgusted by the waste and the thoughtlessness of others. Why should the very people who do not litter get stuck cleaning up for the people who do? Doesn’t this let the perpetrators off scot-free? Aren’t we just reinforcing that no matter what the dumpers throw out, some do-gooder will come along and clean up after them?

I also get discouraged by the constant battle to keep cleaning up litter. I love that people want to band together to keep our home clean, but litter is chronic. What if there were better solutions?

There are solutions, and they start further upstream.

As a child, I remember ad campaigns that preached “Don’t be a litterbug!” or “Give a hoot—don’t pollute!” As kids growing up in Indianapolis, we were encouraged to do the “Hudnut Hook,” named after our popular then-mayor, Bill Hudnut, who would enthusiastically lay-up a wad of discarded paper into the nearest trash can. The Crying Indian was the clincher. This heart-tugging ad sponsored by the organization Keep America Beautiful showed a Native American paddling through polluted waters, letting a single tear slip down his cheek. The narrator would intone: “People start pollution. People can stop it.” 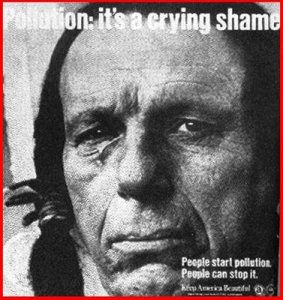 Since that ad first aired, it has been well-documented that the Indian was an Italian American guy named Espera Oscar DeCorti who went by the stage name Iron Eyes Cody, known for playing Native Americans in movie Westerns. He was not an actual Indian, it was not an actual tear, and it wasn’t even his actual long black braid—it was a wig.

The ad’s sponsor, Keep America Beautiful, was also a smokescreen. KAB is not an environmental organization, but a trade group funded by more than 75 organizations, including beverage manufacturer organizations such as the National Soft Drink Association. KAB promotes litter campaigns, a short-term solution, but actively lobbies against more effective ways to reduce litter, such as bottle bills or deposit legislation. THis article details some of KAB’s history and strategy.  Laws like these are very effective in reducing litter. According to the Container Recycling Institute, beverage containers alone make up 40-60% of litter. In the states with bottle bills, the CRI reports, litter is reduced by over 50%.

Major beverage companies also oppose extended producer responsibility (EPR), which forces companies that make these products to provide for some of their disposal or recycling costs. EPR is effective at preventing litter. For instance, electronics manufacturers have already taken on some of that responsibility by providing for the safe collection of e-waste, such as televisions and computers. These items can be safely recycled now through the Recycle Depot or stores like Best Buy, thanks to Indiana’s e-waste laws. Marshall County citizens have told me how much less electronic waste they see in county ditches and along roadsides thanks to safe disposal options.

Litter cleanups are still necessary. In fact, to help more groups participate, Marshall County Solid Waste recently received a grant from the Indiana Department of Environmental Management for a community cleanup trailer. The trailer will be available for loan throughout the county and loaded with all the tools necessary for a safe, effective group litter cleanup. Volunteers who use the trailer will assist the District in tracking how much litter is picked up, what type of materials are found, and where illegal dumping is happening in the county. We hope that this will reduce open dumping, educate people on proper waste disposal, and keep the county cleaner.