Be a Good Neighbor

Last Thursday morning, I wasn’t sure I wanted to get out of bed. 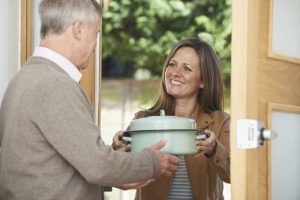 This lady clearly has German ancestors.

It was everything. Wars, earthquakes, pestilence. Bad news.

The Intergovernmental Panel on Climate Change also released its latest report last week, confirming once again what we’ve been seeing all over the news recently, that storms, floods, heatwaves, wildfires, drought are brought on by a warming atmosphere.

For better or worse, I’m a veteran at coping with bad news. Partly it’s my Midwestern, German/Irish/English heritage: we of Northern European descent specialize in waiting-for-the-other-shoe-to-drop pessimism. We are rarely disappointed, and we usually have a restorative casserole in the oven.

Partly it’s working in environmental spaces, where the human effect on the planet is real and irreversible. Humans are not the enemy. We are part of the natural world, too. But we have big brains and big appetites, and there’s a lot of us, so we have had an oversized impact. Dialing back our effects on our home planet requires change—not something most of us relish. How many of you sit in the same pew at church every Sunday? Can I see some hands?

Bad news makes me want to stress-eat a gallon of ice cream, so I’ve been taking steps. Literally—I take long walks. Also, every morning I write down three things I’m grateful for and a lesson I’ve learned in the last 24 hours, some tidbit of wisdom that I’ve gained. “Living into my values is hard sometimes. Full stop.” “Relationships are the only things that last—invest in those.” “Use oven mitts EVERY TIME you pull out the cookie sheet.”

Besides personal practices, I seek out guidance from leaders such as Katherine Hayhoe, a climate scientist who also identifies herself as an evangelical Christian. She is the Chief Scientist at the Nature Conservancy and a distinguished professor at Texas Tech University. Her latest book is called “Saving Us,” and in it she writes about ways to deal with our changing climate and the challenges we are facing because of it. In a recent Time article, she wrote about how taking action can help us find hope despite bad news.

“Change didn’t begin with the King of England deciding to end slavery or the President of the United States giving women the vote or the National Party of South Africa opting to end apartheid,” she writes. “It began when ordinary people—people of no particular power, wealth, or fame—decided that the world could and should be different …They were people who had the courage of their convictions, who used their voices to advocate for the systemic societal changes needed. We are the people who changed the world before: and we are the people who can change it again.”

Having compassion for each other. This is perhaps our biggest challenge in an increasingly divided world. Hayhoe’s advice is simple: take action by being a good neighbor. She writes, “That might sound almost too easy, but in an increasingly polarized and inequitable world, looking out for and caring for each other is vital when faced with extreme weather events like flooding, heatwaves and wildfire. Sticking together as a community, building resilience together, is part of the fight against climate change, too.”

Remember in 2018, when Marshall County faced historic flooding? I was inspired to see how quickly we rallied to help each other, especially those who needed it the most. That’s exactly what Hayhoe is recommending: taking compassionate action.

Not all the folks who create change are heroes. For the few people who make speeches, there are many more of us who fill the sandbags. Being neighborly doesn’t take a crisis. It could be buying a car that uses less gas, contributing to a nonprofit that works on climate issues, or marching at an Earth Day rally. It could mean educating yourself on issues like environmental justice. It could mean having a cookout and inviting people on your block you’ve never met, who might not be like you, but who are still people, all the same. Building connections to withstand the hard stuff.

The world could use less bad news and more good neighbors.